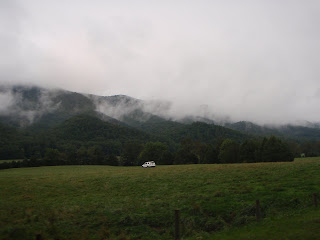 Deja vu?! Did I wake up in France? Let's see, it's the middle of August - check. The sweltering heat was replaced by a cool misty morning - check. I'm about to go on a long, tough ride - check. And I have a cold - check.
After a summer of blazing hot temps, we were treated to cool misty weather for Matt's Harrisonburg, VA 300k. With temps forecast to barely make it into the mid 80's and a slight chance of showers, this was shaping up to be a great day in the saddle. Except for the cold thing.
After missing the whole brevet season this year with pneumonia, I decided work in a late season series and Matt's 300k sounded like a good challenge. On the drive up on Friday, I started getting an annoying post-nasal drip. When I woke up on Saturday morning, it was a full on runny nose and sore throat. Awesome.
Pal Bob O. had come in from the coast for the ride and we split a room at the Super 8. I wasn't the only one with morning ailments, Bob was suffering from acid reflux -- bad enough he was considering not starting. He tried breakfast at the diner, but things weren't looking settled.
So the ride, how did the ride go? Well, we had a very small turnout of only 5 riders: Matt, Bob O., Allan (sp), Aji (sp) and myself. We split up right before we ever started, rolling out while Aji was still in the bathroom. Within a couple miles, Matt had to double back and get his water bottles. Bob was suffering the stomach blues so Allan and I were in the lead and thanks to my superb leadership, we made a wrong turn and were off course within the first ten miles. Patsy had seen us go off course so she chased us down to tell us -- ended up with 5~10 bonus miles.
Back on course, we caught up with Matt about the time we saw Bob on the side of the road -- he didn't look good and would end up pulling out before his stomach got him into big trouble. Alan was putting down a good pace and we shed Matt after a couple miles then Alan started opening a big gap on me up Hankey Mtn. highway.
I managed to catch up with Alan and Aji at the first control, but we all rolled out separately. That'd basically be the theme for the day -- 4 solo riders on course. I managed to catch Alan at each control, but he was running a steady 15 minutes ahead of me. Alan and I did finally regroup in the last 25 miles and finish together at 7:40pm -- 13:40 hours on course (my computer showed 15.7mph rolling average). I'm pretty sure this is the fastest 300k I've ever done and certainly one of the most difficult -- if not THE most difficult. 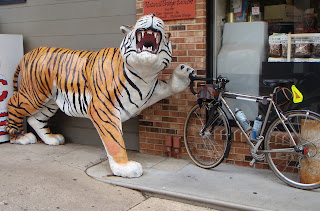 Rawrrr! Rando Habanero takes a break at an Exxon near Natural Bridge. 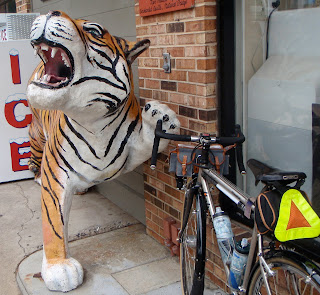 My, what big teeth you have.
If you haven't ridden Matt's Harrisonburg 300k, I highly recommend it. It's a challenging but beautiful route -- lots of winding back roads and beautiful vistas. If you have any designs on PBP '11, I'd suggest checking out this route -- I felt the terrain was very similar to northern France. Lots of rolling hills -- nothing too tough. Ridewithgps.com confirms a little over 11,000 feet of climbing:

This brevet also marked a couple of firsts for me. I've done 50+ brevets/permanents -- gotten my card signed hundreds of times. For the first time ever, a store refused to sign my card -- sited it was "against corporate policy". So to the management at the Stop-In Exxon in Buena Vista, I'd like to cordially invite you to go fuck yourselves.
Another, slightly more positive first, I stopped at a house along the route to beg for water. The 70 mile leg from the first control to the second was very remote -- I'd only seen one open store and didn't know if I'd find another before the control. With around 25 miles to go, I was out of water and getting desperate. I'd stopped at a church but the faucet was dry -- I tried two houses but no one answered the door. The nice lady at the third house kindly obliged to fill my bottle from the sink and even brought me a cold bottle of water from the fridge. Coulda hugged her. And here's the kicker -- there was a store not even a mile down the road.
Post ride -- all things considered, I feel really darn good -- except for the cold thing. It's quickly moving into faucet-like runny nose and a hacking cough. Super Awesome!
Posted by -b at 17:26

Weird about that BV control- we've been through that store a gazillion times. That guy was just an a-hole.

Perhaps L-L-L is paying off for someone?

Must have been a different manager. The lady who was on duty when I passed through was openly hostile.

Congratulations! You are peaking in time for the fall season!

Sounds epic. Glad you made it and hope that cold goes away before your next ride.