A beautiful day in the saddle

Days like this don't come around all that often in July where the temp and humidity are typically racing each other to 100. We were treated to start temps around 60 degrees (almost wanted a light jacket!) eventually only warming to the mid 80's with light winds and low humidity. It was an absolutely perfect day to spin some miles with friends.
I found myself with a "bachelor's" weekend so decided I'd ride my L-L-L route and squeak my July Permanent in early. Mike D., Lynn, Alan and Branson signed on to join me.
Well, I should have taken a group shot before we took off -- within a couple miles, Mike D. and Lynn had broken off the front. We saw them briefly at the first control and again as they passed us on the way back in. 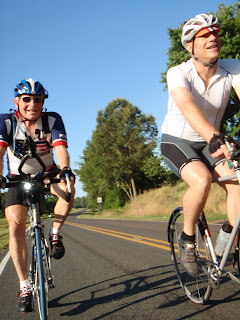 I spent the rest of the day riding with Branson and our local RBA, Alan -- a fella couldn't ask for better riding companions. Branson and I have both been busy with our new families and hadn't ridden together since last fall -- we spent the day catching up on how our little boys are doing. 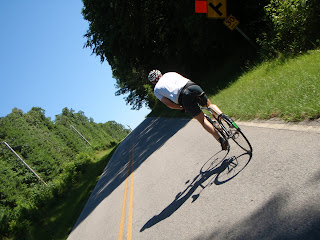 Branson attacks on the Moore's Mill "wall".
The "Hard Man" of the day award goes to Branson who showed up for this rather hilly ride on a fixed gear. And here I was waffling between riding my bike with the compact double or triple crank -- silly me.

We had a great ride out to the turn-aroud control, arriving right at noon. I'm a big fan of olde-time country stores and the Leasburg Grocery is one of those places. Despite being a rather small store, they seem to do a brisk business (they're really the only thing out there) -- a steady stream of people hauling boats made their way through the store while we were there. 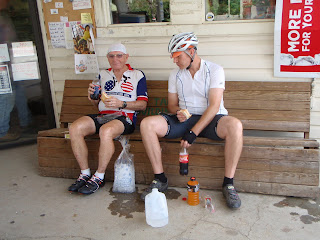 Alan and Branson relax and refuel at Leasburg. 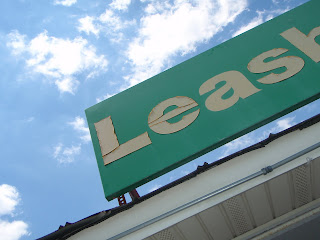 The iconic Leasburg store.
We only had one mechanical mishap for the day. While descending Moore's Mill road on the return, my right pedal fell off! Fortunately, I was just starting to pedal again after coasting down the hill, or the outcome could have been much worse.
The seal or bearing in my right pedal was starting to seize up -- I was barely able to turn the pedal by hand -- it must have developed enough friction to back out of the crank arm. The crank threads were a little monkeyed up, but I was able to get the pedal threaded back in and continue on, though I was obsessively watching the pedal for the rest of the ride.
Overall, it was a great day in the saddle with some great company!
Posted by -b at 21:53

Thanks for a setting us up with a beautiful route. It was great catching up with you and Alan. BTW- found the ankle reflector at the top of the hill!