For the second year in a row, the Brighleaf Hoedown in Yanceyville, NC has been marred by wet weather.
Back in 2006 Adrian started a little tradition of getting a group of riders together and riding up to Yanceyville for the annual Brightleaf Hoedown. Sure, the Hoedown is fun in and of itself, but it's becoming a tradition. A chance to get together with old friends and new ones for some beautiful riding and camping. This year, Chloe sent out the call and a hearty group of 6 signed on. 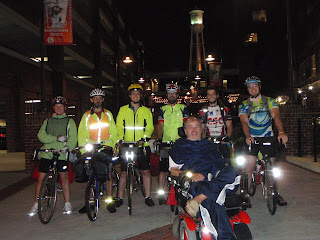 (from left to right: Melissa, Dave, Chloe, me, Moshe, Ian & Adrian in front)
The plan was to meet at Mellow Mushroom at Brightleaf in Durham on Friday around 7pm for a 8pm roll out. Well, we didn't get out of there till nearly 9pm, but the later start worked out perfectly, providing a nearly rain-free ride into Yanceyville. On the way up, we split into two groups -- Moshe, Ian and I rolled in at exactly 1am. The rest of the group weren't far behind. By 2am, everything was sorted out, tents were pitched and it was time for a bit of shut eye. The gentle rain pattering on my tent fly sang me to sleep.
Saturday morning greeted Yanceyville, with steel-gray skies, but at least it was dry for now... 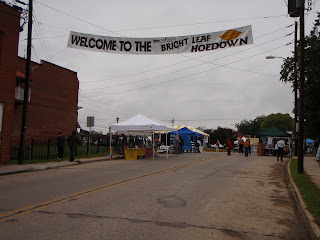 (vendors setting up under ominous skies)
The Hoedown kicked off with a musical performance by the Bartlet Yancey High School marching band and followed shortly with the mock tobacco auction. 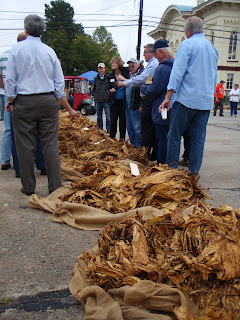 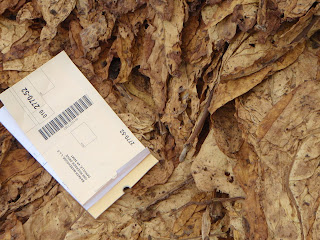 (sold!)
If you haven't guessed by the name of the event, the Hoedown is all about tobacco -- brightleaf tobacco to be specific.
For Yanceyville and Caswell county (as well as much of North Carolina), tobacco was once one of the most important cash crops. These days, tobacco's role in North Carolina's economics is greatly reduced. I'm not a big fan of the stuff and understand it's inherent health risks, but at the same time, I worked on a tobacco farm during my teenage years and also understand it's importance in the lives of the farmers in our state.
We all spent the day wandering around town checking out the vendors, reporting back on who had the best eats and people watching.
Chloe and I decided to go ahead and head back to Durham on Saturday night as opposed to Sunday morning. We both had plans for Sunday and just decided an earlier departure would be easier. We rolled out of Yanceyville, a little after 5pm into a gentle mist. 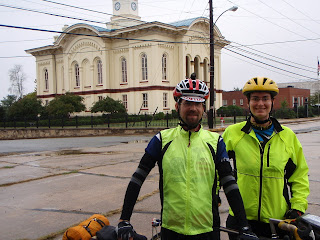 (getting ready to roll out of Yanceyville)
One of my favorite parts about Adrian's route up to Yanceyville is how quiet the back roads are. I think I could count all of the cars that passed us (until we reached Durham) on one hand. Temps were mild (probably in the 60's) and rain was mostly a faint drizzle -- English weather. We were both enjoying the ride and chatted for miles and miles.
Overall, it was a great trip! I wish the weather could have been better for the Hoedown -- the scale of the festival has been greatly reduced for the past couple years. Maybe the folks in Yanceyville will catch a break next year and the Hoedown will continue to prosper. I'm already looking forward to next year's trip!
For me, one of the highlights of the weekend was a little side trip to check out one of the old abandoned houses in Yanceyville. Here's a series of shots I took inside the old house: 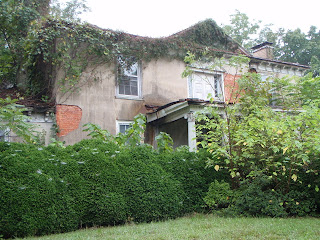 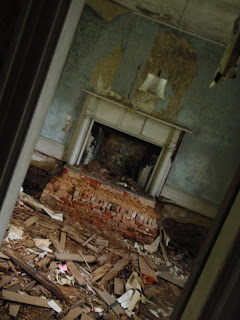 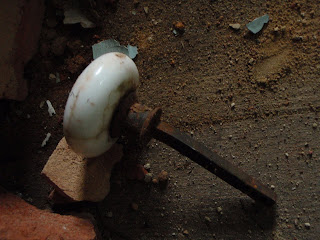 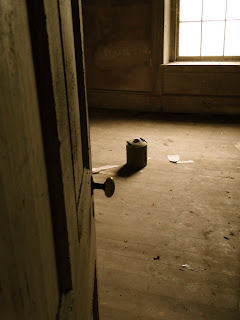 Addendum:
Ah yes, the skunk. We had a bit of an encounter of the odoriferous kind. Not sure what road we were on, but we were pretty much all together when Moshe called out "hey, what's that in the road". I turned my helmet light on and spotlighted a cute little skunk bounding along in the left lane and called out "SKUNK!!". He had his tail up and in the "ready" position.
As we rolled past, there was a bit of confusion and touching of brakes and Melissa went down very close to where the skunk was. At first, I though she might have been sprayed, but fortunately, no. Had one of us been sprayed, it sure would have been a different weekend!
We also had "visitors" at the camp. I got up sometime in the wee hours of the morning to, um, take wee, and noticed two small critters checking out Moshe and the bikes in the gazebo. Couldn't tell what they were -- probably opossums.
Also added a pic of my bike packed for the trip and another shot from the old house. Enjoy! 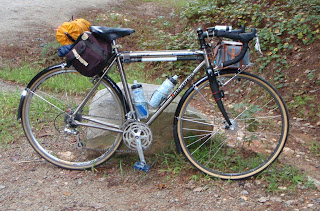 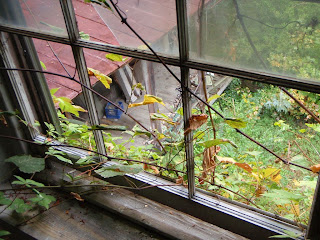 Scenes from the Commute -- YAWS (Yet Another Water Snake)

Hey, remember the little northern water snake I blogged about a little while back?… Yeah, well I think I've found it's Ma (or Pa). 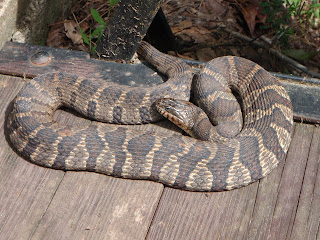 I spotted this fat bastard on one of the bridges along the Black Creek Greenway in Cary the other afternoon. At first glance, I though it was a water moccasin -- and that's basically what the water snake wants you to think. Moccasins are bad asses and everyone knows to leave them alone.

As a defensive posture, water snakes will flatten their body and head to make themselves look bigger and their head will take on a triangular shape mimicking a venomous snake. However, sometimes mimicry can get you in trouble.

Problem is, most people see the water snake and think "yikes, it's a moccasin" and the next thing you know, they've grabbed a shovel and it's "off with ye' head". It's kind of a shame.

I'm not sure whether this fella had just finished a large meal or the eaten' is good in his neighborhood, but I was impressed with just how "hefty" this snake was. Overall, it was probably a good 2.5 feet long and 3" across at the widest point -- which is about as big as these snakes normally get. 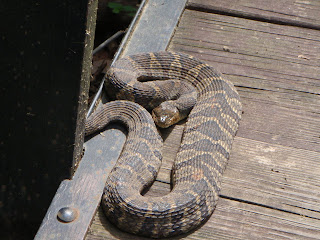 I love the coloration and detail in it's keeled scales. 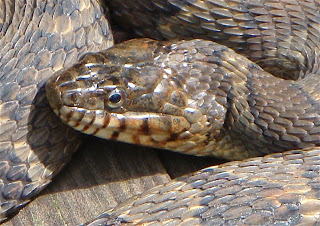