How I Roll -- The Dinglehoffer 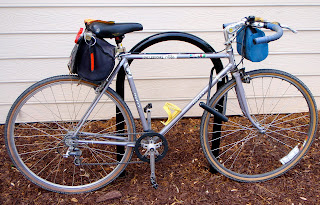 I was inspired to do this write up by a feature in the Bicycle Times magazine (great bike mag, btw) called "How we roll" where a reader and their bike are profiled.
I love to tinker, and for years, I've run Sturmey Archer hub gears for commuting. I've always wanted to try one of the vintage Cyclo conversion kits that allowed you to run two or three cogs on a S/A hub. The Cyclo cogs pop up on ebay from time to time, but they tend to go for a pretty good chunk of change.
A year or so ago, I ran across the Surly Dingle which is basically a two-speed fixed cog and I thought this is something I can use. I also happened to have a rare, threaded driver for the AW hub -- the Dingle threaded on perfectly! A bit of tinkering and sourcing for odd parts and my 3-speed commuter was now a 6-speed -- thus was born the Dinglehoffer.
The cockpit. S/A trigger on moustache bars to control the hub and a stem shifter for the derailleur. The stem is a no-name brand adjustable angle suspension stem. I didn't have great expectations for it, but the stem actually does a nice job smoothing out the rougher bits in the park and takes the edge off the spots on the greenway where tree roots have heaved the pavement. 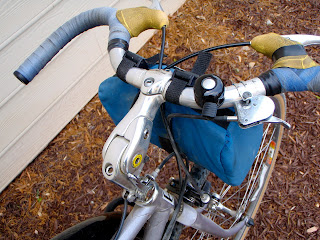 The wiring. A Sachs double cable guide collects the housings at the front of the downtube. 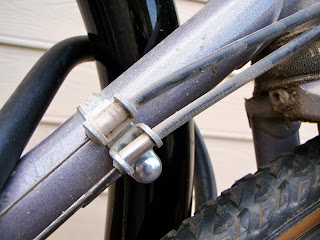 Both cables run through the cable guide at the bottom bracket. 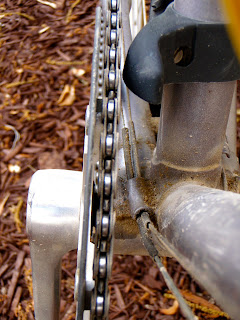 Outback, the cable for the rear derailleur utilizes the normal housing stop and the S/A cable runs straight to the hub. I used a zip-tie to hold the S/A cable in a little closer to the chain stay so my heel doesn't snag it. 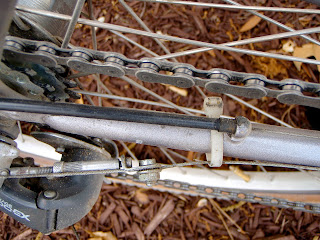 The business end. I ended up using an old low-endish Shimano rear derailleur mainly because it's tough to get the limit screws far enough in on most derailleurs to limit them to just two cogs. The Shimano was no exception, but it uses standard 3mm bolts that you can get from the hardware store -- note the really long limit screw kinda hanging off the bottom of the image. I also needed to swap out the floating upper pulley in the derailleur for a non-floating pulley. 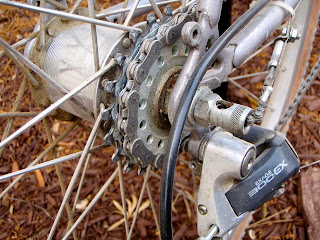 The Gear Chart. So far I really haven't been shifting the dingle too much -- I've basically been riding it as a 4-speed. I mainly stay on the 17-tooth cog and just shift the hub -- occasionally reaching for the 21-tooth cog on really steep little climbs.

I'm kinda impressed with how the whole thing turned out. There are still a couple of small kinks to work out, but the bike is a blast to ride and just about as much fun to cobble together!
Posted by -b at 23:08 No comments:

Scenes from the Commute -- Baby Snake 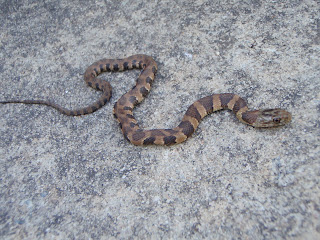 Well, kinda. I rolled into the driveway the other night to find this tiny juvenile Northern Water Snake next to my car. From tip to tail, the little fella was only about 6~7 inches long.

Seeing as how he's pretty harmless and was in a patient mood, I decided to get some close-up shots. This shot was taken in super macro mode with my little Olympus camera from about 2" away. 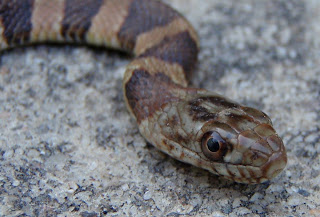 Zoom in a bit and... Yikes! I think I can see my reflection in his eye! 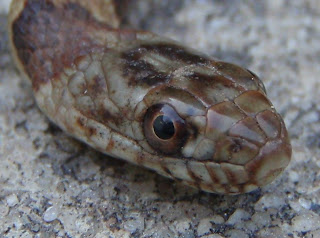 This make for the 6th species of snake that I've spotted in my yard (Northern Water Snake; Eastern Garter Snake; Brown Snake; Redbelly Snake; Black Racer; Copperhead). I've never been a big fan of snakes and used to be deathly afraid of them, but the more I encounter them and study them, the more facinating I find them. Sure, I still hold tons of respect -- and fear -- of venomous snakes, but they are beautiful creatures (in their own way) and a very important part of our world.
Posted by -b at 17:10 1 comment: 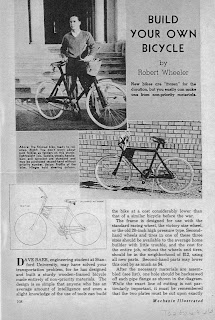 This spring I was fortunate to be able to attend NAHBS (North American Handmade Bicycle Show) in Richmond VA. Amongst the hordes of beautiful steel bikes I lusted over, there were a number of interesting wooden bikes. Most notably, bamboo creations from Calfee and Boo Bicycles.

The intricately laminated Sylvan frames also caught my attention. Their attention to detail in the laminated and octagon mitered tubes was really quite beautiful.

I've always been appreciative of the labor that goes into a fine piece of woodwork. My dad is a self-taught woodworker and is quite talented. As for myself, I've just never been good at it -- I guess it skips a generation.

All these wooden bikes triggered something in my memory -- somewhere around the house, I have an old magazine article from the 1940's that details how to build your own bike from wood. Apparently, steel tubing was tough to get during World War II and many bicycle companies ceased production.

The picture above is the cover page for the 4 page article. I'll applaud the plans for their simplicity. You'll have to scavenge some parts (wheels, cranks, handlebars, seat), but the rest of the materials are something any farmer or competent tinkerer would have around the shop.

You can view and download high resolution copies of the 4 page article here.

Itching to build your own wooden bike but afraid to build and ride the death-trap in the plans above (I sure am)? The current issue of Urban Velo Magazine has an interesting article on the Bamboo Bike Studio in Brooklyn -- you can read the full article on Urban Velo's site.
Posted by -b at 15:58 No comments: